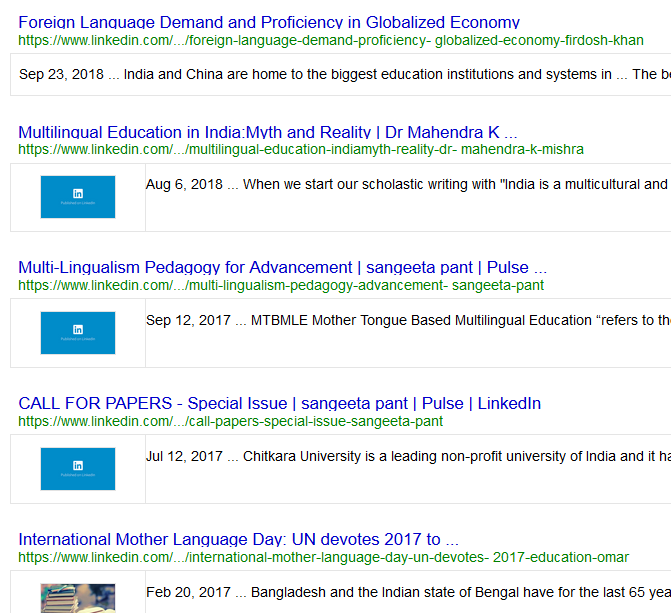 While browsing in LinkedIn I discovered that this site also contains some interesting articles on multilingual education. The articles tend to be short but can be still of interest. A few relevant ones I will mention below.


A couple of months ago our friend Dr. Mahendra Mishra published a brief article on Multilingual education in India: myth and reality. In that he addresses the discrepancy between the constitutional rights to have education in the mother tongue and the daily practice in the schools.

I found an relevant paper from Manu George on "School dropout among tribal students with special reference to Paniaya tribe in Wayanad district" which lists several reasons for dropouts and recognizes that one of those is related to languages. In the findings it states that learning materials are needed in the tribal language and teachers need to know the language as "the tribal students often face problems for discussing their ideas and clearing their doubts with teachers".

Under the title "MaCaulay's Children" Kanwal Rekhi makes the case that the preference for Hindi by the government over English has had a long-term negative impact. Blogger Ankit Chauhan on the other hand in his post on The language conundrum argues that having more Hindi-medium courses in higher education would provide great opportunities to a large part of the population. In both post other, more local languages are out of the picture.

Dr Sangeeta Pant writes about the power of multilingual education to improve understanding and enrich the cultural awareness of the children. A few quotes from her article on Multi-Lingualism Pedagogy for Advancement: "The founding principle, or primary function, of Mother Tongue Based Multilingual Education is therefore to draw from students’ abilities in their mother tongue in order for students to better learn new subjects." and "Mother Tongue is essential for one’s cultural development, National Language is imperative to converse with people of other regions and last but not the least, International Language plays a key role in enablement of communication and placing people of various backgrounds as global citizens on the world map"

Good to find those writings!
Regards,