[MLE] Language, the basis of unity and conflict 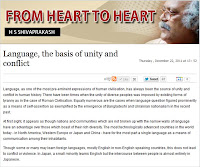 A while ago I travelled with a donor to review an MLE related project in North East India. Her concern was that our efforts to develop the local languages and use them in the schools would encourage the ethnic conflicts. Today I saw an IBN article titled "Language, the basis of unity and conflict" by Prof H S Shivaprakash on this very issue.

Language, as one of the most pre-eminent expressions of human civilisation, has always been the source of unity and conflict in human history. There have been times when the unity of diverse peoples was imposed by existing forms of tyranny as in the case of Roman Civilisation. Equally numerous are the cases when language question figured prominently as a means of self-assertion as exemplified by the emergence of Bangladeshi and Ukrainian nationalism in the recent past.

India never had the counterpart of the first Chinese emperor [who wiped out all local languages -KvR]. Though at different points of time, some languages were used as lingua franca or trans-regional languages - Sanskrit, for example - the regional languages, including innumerable tribal languages without script not only did not vanish but went on flourishing as they produced high quality literary expressions, both oral and written.

Let us celebrate the diversity of our tongues, which is a hallmark of our civilisational genius. In order to offset eruptions of linguistic chauvinism, we need to reinvigorate multilingualism which has been an integral part of our culture. At the same time, we need to emphasise the need for equal growth of regions and communities to ensure the equality of languages.

Once again the JNU National Multilingual Education Resource Consortium (NMRC) has brought out a high quality newsletter. The main topic is the outcome of a longitudinal research spanning over the last three years done in Orissa and AP: "DOES MLE WORK IN ANDHRA PRADESH & ODISHA? A LONGITUDINAL STUDY"


"To sum up, the findings across the two states and five time frames, it can be pointed out that in case of both Andhra Pradesh and Odisha,the MLE children had better overall performance in all the objective measures of achievement taken together; MANOVA analyses for the state specific data over the five time-frames showed clearly that the performance of the MLE children was significantly better than that of their non-MLE counterparts when all the variables are taken together." (P13)

"All the MLE teachers interviewed (except one) expressed that mother tongue of the child was ideal medium of instruction at the primary
level since it would help students relate better to what was being taught and also remove any fear and inhibitions that they might experience in the schools. " (P15)

"The dominant sentiment of the tribal communities was a pragmatic targeting development of children's competence in the state language in both the states. However, because of MLE experience, many parents were changing their views and were favouring the decision that early education should be done in children's mother tongue. Parents whose children go to MLE schools were considerably more satisfied with their
children's learning in school though they continued to have some anxiety towards late introduction of regional language in this new curriculum." (P22)

ASER Centre recently released Inside Primary Schools: A study of teaching and learning in rural India. Supported by UNICEF and UNESCO, this longitudinal study tracked 30,000 rural children studying in Std 2 and Std 4 in 900 schools across five states (Andhra Pradesh, Assam, Himachal Pradesh, Jharkhand, and Rajasthan). These children, their classes, schools and families were tracked over a period of 15 months (2009-2010) in order to take a comprehensive look at the factors in the school, in the classroom and in the family that correlate with children’s learning outcomes. (See a summary of the outcomes below)

They also studied the difference between children whose home language is the same with children with a different home language. It makes clear that this indeed makes an impact on learning of the children. A quote:


The table attached shows  some relevant findings too. It  would be interesting to connect this data to drop-out rates too.