Showing posts with the label survey
Show all 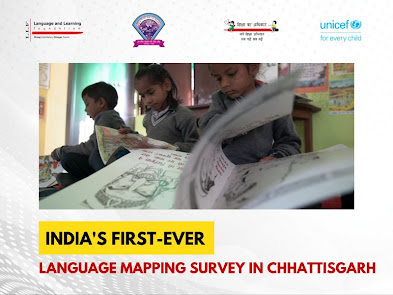 The Language  and Learning Foundation has conducted India's first-ever language mapping of schools survey in Chhattisgarh: Language Mapping of Schools in Chhattisgarh .  The survey was carried out under the NIPUN Bharat initiative  in collaboration with the Government of Chhattisgarh and UNICEF India. The report  maps the different language situations that are present in each school with the aim to design an effective education strategy and policy. Through this research almost 30,000 schools were surveyed. The focus was on the first grade and the information gathered was mainly through the teachers. The following conclusion was stated in the summary of the report: The survey shows that in about 75% of the schools students are likely to face moderate to severe learning disadvantage due to the difference between their home language and the school language used as the medium of instruction. It also shows that about 95% of students at the time of entry to the primary schools speak a h
Read more 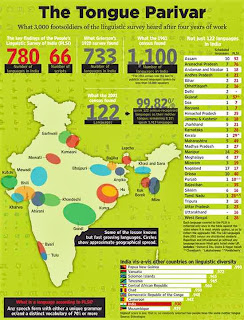 Dear Multilingual Education friends, This week there are lots of articles in the media about the language situation in India because of the release of the People’s Linguistic Survey of India (PLSI) results. The Outlook Article: Speaking of us links the issue of language loss and language celebration to the need for multilingual education. It starts with touching story about a tribal girl getting a second chance in a multilingual school in Gujarat after she failed in the regular system: “Why did you not learn anything at school?” Chaudhary Rekha, the teacher, asks. ... “Because our teacher, whenever he came, always taught in Gujarati,” she says softly in Dungra Bhili. A year at the Tejgadh-based Adi­vasi Academy’s Vasant Bahubhashi Shala has changed that. She can now read and write with much greater fluency. And all thanks to classes in a language she can finally understand. Some other quotes:
Read more

Dear multilingual education friends, Yesterday I read in the Indian Express India speaks...780 ways about the completion of the People's Linguistic Survey of India (PLSI). They found 780 languages spoken in India. A quote: After what can easily be called the largest-ever survey of languages in the world, spread over four years, involving around 85 institutions, roping in as many linguists, sociologists, anthropologists and cultural activists, and tapping over 3,000 volunteers, the centre has compiled its findings. In the year 2013, shows the 'People's Linguistic Survey of India (PLSI)', there are 780 languages spoken across the length and breadth of the country. In contrast, the 2001 Census listed just 122 languages
Read more