Showing posts with the label World Bank
Show all 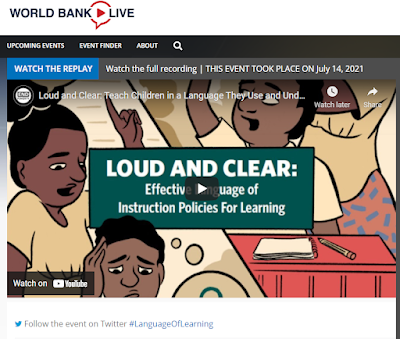 The World Bank has for many years been supportive of the concept of mother tongue-based multilingual education, (MTBMLE) but this year for the first time they produced a policy paper on it. The launch of the report last week was accompanied by a webinar on "Effective language of instruction policies for learning". The webinar included roundtable discussions with politicians, policymakers and practitioners. One of them being Dhir Jingran, the director of LLF in India.
Read more

Dear Multilingual Education friends, Samir Karmakar of Jadavpur University , Kolkata wrote on CounterCurrent an short article on Linguistic Right And Language of Politics . He points out through a powerful graph that even the state languages are declining. He criticises the multilingual education efforts as they still seems to promote a shift to English: The introduction of mother tongue in the elementary education, as is proposed by different agencies, is mainly from the angle of cognitive development. In order to facilitate the young learners' cognitive development, their mother tongues are proposed to include in the language curriculum in elementary level under the assumption that, as has been pointed out by World Bank in Priorities and Strategies for Education (1995), this approach will “promote the cognitive development needed for learning a second language”. As the learner moves to the h
Read more
More posts