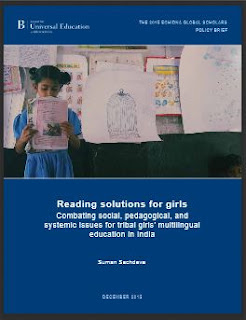 Policy Brief - Reading Solutions for girls in a multilingual setting


The 28 page Policy Brief has been written by Suman Sachdeva, Technical Director Education, CARE India. Here are a few highlights taken from a summary on the brooking website:
The paper ends with six "Solutions for Girls' reading", which gives some good recommandations. Obviously a must-read for those of us involved in tribal education and gender!
Read more »
Posted by Karsten at 10:53 AM 2 comments: Links to this post 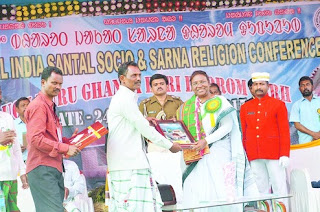 Earlier this week the governor of Jharkhand pleaded that Santhali children should be educated in their mother tongue. It looks like this is indeed going to happen and not only for Santhali, but also Mundari, Ho, Kudukh and Kharia children .


The Telegraph reports this week: Ethnic kids of Classes I & II to open new page next year. Binay Pattanayak and his team at the Unicef Jharkhand office has been working closely with the Jharkhand Council for Education, Research and Training (JCERT) to prepare textbooks for langauge and maths for class 1 and 2 in five tribal langauges. The plan is that they will be introduced from the next academic session onwards. 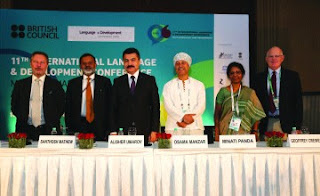 Delhi Conference on Multilingualism and Development


The Statemam  published this week an article with highlights of the conference Of course there was quite some attention given to the role that English plays in the sociolinguistic arena india. Prof Ajit Mohanty spoke in that regard about  "a double divide: one between the elitist language of power and the major regional languages (vernaculars) and, the other, between the regional languages and the dominated indigenous languages."

While talking about the promises the parents are given while enrolling their children in private English medium schools, Giridhar Rao of Azim Premji University, "argued that it is a false promise for two reasons. The first is the poor condition of the education system in the country. ... private schools do not give better academic results compared to government schools. The second reason, according to Rao, is that the introduction and teaching of English do not emerge out of a mother-tongue-based multi-lingual education."

Relevant was also a presentations  by Seemita Mohanty, National Institute of Technology, on Mother-Tongue-Based Multilingual Education in the Indian State of Odisha.. She concluded: "Even though the programme is progressing on the right track, there are still numerous issues that need to be handled at the implementation level before it can be designated a success."

Not to often we hear about the particular linguistic needs of Moslim learners. Sajida Sultana, English and Foreign Languages University, presented on Muslim Education and Multilingual Contexts: A Study of Madrasas in Hyderabad. It focused on the multi-lingual context of madrasa education and concluded that "there is a need to have a greater understanding of madrasa education and also to relate research insights into curricular innovations in the teaching of English in non-native contexts."

Many more presentation were given. The British Council website reports: "The event was the largest of the conference series so far, attracting over 260 participants and with a programme of more than sixty sessions. Over 30 countries were represented, from Afghanistan to South Africa, Bhutan to the Philippines."
Read more »
Posted by Karsten at 8:56 PM No comments: Links to this post

[MLE] Pratham: Weave your own story in any language

A Book in Every Hand

Last month Pratham Books, a UNICEF founded NGO, released more than 800 books in 27 languages on the StoryWeaver India website. Anyone can add, translate or read books there.

The Indian Express reports in the article A book in every hand: Pratham Books wants to make reading fun and accessible for children that a week after releasing the website https://storyweaver.org.in/ there were 800+ books and 20,000 reads. Currently the teller is on nearly 35000 reads and the site has over 900 stories in 27 languages. Till now the languages listed are mainly state or foreign languages, but it is likely possible to translate to or write in any langauge. Worth trying!
There are some differences and similarities with the software BLOOM that recently won the Enabling Writers competition (see Blog Post from last June). Bloom can be used off line and is focussed on creating books for paper publishing while Story Weaver is particularly good at web publication. They both work well together, see e.g. the book "Listen to my body".

Read more »
Posted by Karsten at 7:02 PM No comments: Links to this post

The government of Uttarakhand has decided to have the two major vernacular languages of the state, Kumauni and Gharwali, taught at all the primary schools.


The article "Grads in Kumaoni, Garhwali may be taken as primary, junior school teachers"  in the Times of India presents it an an employment opportunity, but it seems much more than that.  The article quotes Prof Dr.. S.S. Bisht saying: ""This is very good news for us, as teaching the languages to students from class I will help revive not only the dialects but also their associated cultures," Interestingly now the state is struggling to find enough qualified teachers to implement this: "It will be difficult to meet such a high demand in so short time. However, from this academic year, we have introduced options to study the language as an elective or as a single-subject course to increase the number of students,"

For me personally this is fun news as we lived in the Kumaun for many years and Dr Bisht was our neighbor. Congratulations, Dr Bisht for your hard work!

Read more »
Posted by Karsten at 4:02 PM No comments: Links to this post

Software to build a Community Library

Just making a reading method for children in minortity language communities is not enough. They need books to read, many books! BLOOM software was recently selected as one of the three finalists in an "All Children Reading" software contest.


Bloom is a low-tech piece of sofware that helps with making books in any language. The website states:
I have heard from several people that BLOOM can handle non-Roman Scripts, but more than that, I learned that their helpdesk is very responsive when you happen to encounter a problem. Bloom has started a Bloom library in which you can share your books so that others can benefit from them. You as user can also benefit from the more than 150 books already in the library and can adjust them to the local situation.

Bloom links to the The Art of Reading which gives you access to over 10,000 black & white illustrations from around the world.
Read more »
Posted by Karsten at 1:09 PM 2 comments: Links to this post


Read more »
Posted by Karsten at 12:35 PM No comments: Links to this post

[MLE] Language 4x in the news this week

Read more »
Posted by Karsten at 2:51 PM No comments: Links to this post

[MLE] Outlook: In Bastar district kids do not understand their teacher

Read more »
Posted by Karsten at 11:53 AM No comments: Links to this post

Read more »
Posted by Karsten at 1:25 PM No comments: Links to this post 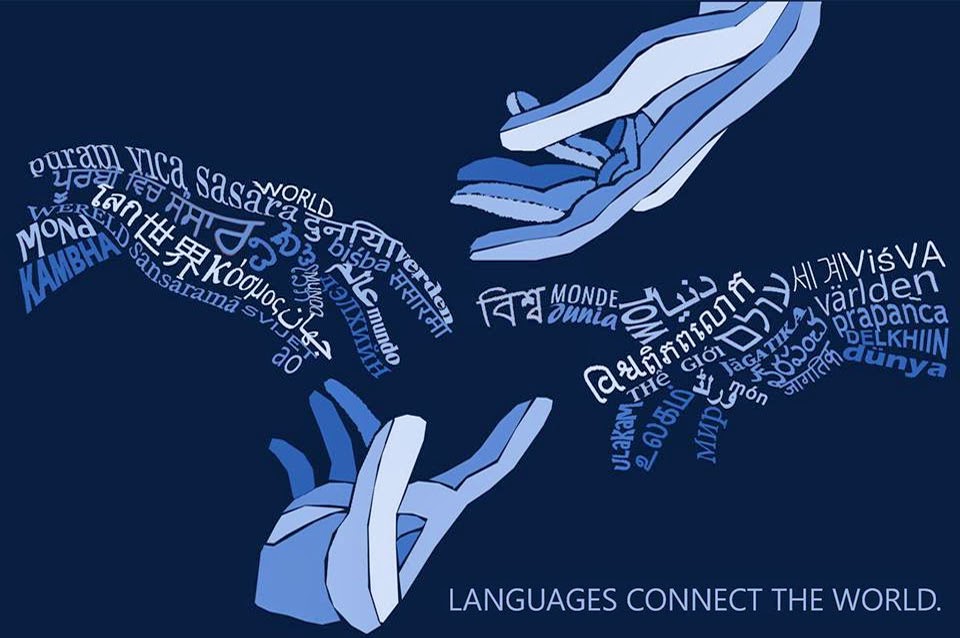 Every year after Feb 21st, the International Mother Language Day, it is fun to surf the internet to see what is done in India to celebrate the languages that the children speak at home.

This year the United Nations has put the spotlights on the educational aspect of celebrating the mother tongue:
"International Mother Language Day is a moment for all of us to raise the flag for the importance of mother tongue to all educational efforts, to enhance the quality of learning and to reach the unreached. Every girl and boy, every woman and man must have the tools to participate fully in the lives of their societies – this is a basic human right and it is a force for the sustainability of all development" (UN Source)

The Ministry of Human Resource Development (MHRD) has send a notice to the English medium schools affiliated with Central Board of Secondary Education (CBSE) to mark the occasion with celebrations and contests. The notice reads:
"It has been decided to celebrate Matribhasha Diwas to promote the use and to sensitize people about the need of greater use of mother tongue and other Indian languages for progress of the nation, to impart communication skills and proficiency in mother tongue and other Indian languages amongst English-medium students, to support translations from other languages into mother tongue, to give fillip to popularize adaptation of latest technologies for Indian languages and to encourage people to learn one more Indian language."
However given the late date this was send and the fact that it coincided with exam dates the Times of India reports that it is not likely that many schools will have done anything with the notice.

The Indian blogger Sucharita Sen writes:
"While UN takes its own initiatives to bring about language awareness and tolerance, can we not come together to celebrate our own mother tongue, India being such a rich and diversified sub-continent?"

Read more »
Posted by Karsten at 12:57 PM No comments: Links to this post

[MLE] MLE promoted at the State Vision Conclave in Jharkhand

Read more »
Posted by Karsten at 1:50 PM No comments: Links to this post


Read more »
Posted by Karsten at 12:01 PM No comments: Links to this post