Showing posts from January, 2011
Show all

January 29, 2011
Dear MLE friends, Research outside of the western countries on the impact of education in the mother tongue is much needed. Below are some links to research presently going on in Africa.   EdQual is a research project consortium funded by DfID, studying education quality in low-income countries. On 15 November, it reported to DfID and other interested agencies along with 2 other research project consortia. As part of the EdQual programme, colleagues from Ghana and Tanzania looked into issues of medium of instruction and its relation to quality of learning. If you are interested in interim findings to do with MoI and textbook accessibility, please use the following links: http://www.edqual.org/publications/presentations/textbooks.pdf http://www.edqual.org/publications/presentations/Langofinstruction.pdf
Read more

Dear MLE friends, Each year ASER does extensive research on the impact that education makes. Their research data is highly valued, not only in the NGO world but also by the government itself. The 2010 report shows as well progress as declines. The press report states regarding the reading skills: Even after five years in school, close to half of all children are not even at the level expected of them after two years in school. Only 53.4% children in Std V could read a Std II level text. The Calcutta edition of the Telegraph reports " Tribal heartland betters its report card ", this is given as the reason: Santhal Pargana Gram Rachna Sansthan, the NGO that helped in survey work in Godda, credited the district's performance to maximum involvement of para-teachers, school teachers and Integrated Child Development Services centres. These units, set up under a Centre-sponsored scheme, addresses healt
Read more 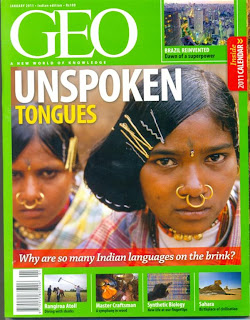 Dear MLE friends, For most of us the preservation of languages is not the main reason to be interested in MLE. Still we do see the value of language in relation to culture. The January Issue of the Indian version of the magazine GEO has a cover story on "Unspoken tongues'. Some relevant quotes: Few actually realise that languages are more than just a means of communication. They are emblematic of the way a people perceive the world and, thereby. offer a unique insight into the people who speak them and the cultures they represent. In the case of Bo and other Great Andamanese languages, they hold up a mirror to a tribal people whose culture dates back thousands of years. Kanji Patel, a writer in Panchmahali Bhili, one of Gujarat's many endangered languages, says there are three fundamentals requi
Read more

January 12, 2011
Dear MLE friends, Last July the list forwarded a news item from The Hindu on new tribal scripts. I just learned that last October also Outlook wrote an article on this. See: http://www.outlookindia.com/article.aspx?267220 . A quote: “A script serves to legalise their language and protect their vast oral riches. But, more importantly, there is now a growing realisation that an indigenous, independent script also helps boost cultural identity,” says Sree. She uses easily identifiable symbols in her alphabets to strike a chord with the tribals. For example, an abstract bow and arrow is a motif in her script for the Kupias, who are renowned as skilled archers. New scripts are not for assertion of identity alone: they are also being created for accurately representing the unique sounds of tribal languages instead of letting them be drowned out, over time and
Read more

January 08, 2011
Dear MLE friends, The National Multilingual Education Resource Consortium (NMRC) from JNU is producing a newsletter with quality articles on MLE. The latest newsletter is no exception on that. It does focus on the "as far as possible" phrase tagged to the mother tongue reference in the Right to Education act.  Some topics: Prof Anvita Abbi : "Don't kill my Mother (tongue)" Sara Poehlman: "Mother Tongue Instruction 'as far as practicable' as Child's' right" Sara Poehlman: "Story telling for effective language transition in Assam Tea Gardens" Sikshi Manocha: "Witnessing the change" (a powerful testimony on the impact of MLE in the Saora community in Orissa)
Read more

[MLE] Papers from Bangkok conference now on the web

January 04, 2011
Dear MLE friends, The international conference on "Language, Education and the Millennium Development Goals" that took place in Bangkok last November has generated a set of interesting papers. They are now all on the web. Have a look at : http://www.seameo.org/LanguageMDGConference2010/presentations.html . Here are a few papers with a reference to India: Mr. Sanjeev Kumar Rai (Save the Children), Schools Marginalize Children in Multiple ways: Language Policy, Right to Education Act and Classroom Practices in India Ms. Jaya Krithika Ojha (Indian Institute of Technology Roorkee), Moving from Silence to Speech: Role of Language in Women empowerment in an Indian Desert Mr. Prashanta Kumar Routray (Kalinga Institute of Social Sciences, India), Empowerment of tribals through education and sustainable livelihood: A Kalinga Institute of Social Sciences (KISS) model Dr. Pamela MacKenzie (International
Read more

January 03, 2011
Dear MLE friends, It is not too often that we hear on MLE related issues from our North-Western neighbours. This article in the Guardian discusses a report stating that the Urdu and English dominance in the school "threatens to undermine social cohesion" "The report's key proposal is to provide teaching to students in the language they are most familiar with and, for the first time, reflect Pakistan's multilingual identity in classrooms. There are more than 70 languages spoken in Pakistan, yet Urdu, the national language and the medium of instruction in the majority of state schools, is spoken by just 7% of the population." Also good to note the following: "Coleman says his "wish list" for education reform has been positively received inside Pakistan. He is now in the process of analysing feedback before presenting his final proposals next April."
Read more

January 03, 2011
Dear MLE friends, First of all a happy new year to you all. May 2011 bring improvement to the education situation of the many deprived children in South Asia! "We need more research, more proof!" is what we often hear. Save the Children in Bangladesh did some research on the impact of an MLE project in the hill tribes. They published it in a 12 page report titled: " Getting ready for school in the Chittagong Hill Tracts:   A comparative analysis of mother-tongue- and national-language-based preschools in Adivasi communities ". A few lines from the concluding paragraph: "Despite all of these limitations, it is clear from the study that SKPís mother-tongue-based preschools do offer children a significant advantage.  SKP children have better quantitative, communicative, and environmental skills than their peers.  On average, children learning in a MT setting outperformed their non-MT peers
Read more
More posts