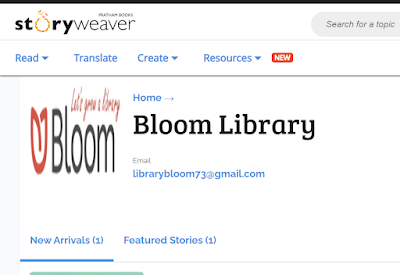 At the recent International Mother Tongue Language Day, the use of technology was emphasised. Bloom Library and Storyweaver are two pieces of simple software which come to the rescue of educators, parents, and students who want to create books in their own language. It is good to note that, rather than competing with each other, they complement each other and host each other's books and resources on their websites.

As many of you are already aware, there are two very useful online book-creation tools that are making enjoyable reading material available for children in many different languages. They are Storyweaver from Pratham Books and Bloom Library  by SIL International. Both of these online libraries not only offer books in many languages but also allow one to create one’s own books and download them for future use. They also have a variety of  image libraries which can be used by someone creating a resource.

What many of us might not be aware of is that these two tools collaborate. Creative Commons licensing is something both libraries use in order to collaborate this way. That means that others can adapt and publish their own versions of someone else's books. An example of a story shared by both is the book “I feel” by Craig Aldred, which is available even in Sanskrit on Story Weaver, is credited to Bloom Library. In turn, Bloom Library hosts nearly 300  books from Storyweaver. All books  can be translated into local languages on either platform. They  promote by linking each other in their webpages.

Storyweaver, being based in India, has a wide variety of books in many languages: 4000 books in 22 Indian Languages. Bloom hosts 10766 books in 465 languages as well as sign languages. Although Story Weaver can only create books online, Bloom allows for offline editing as well, which should help in places that have limited or no internet access.

The beauty of these two online resources is that anyone can create their own books and translate other books into their own language. May many more books be created in many more languages!