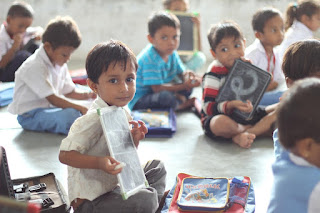 When I read the news that “Tribal children in Jharkhand get lessons in their own language”, I checked back with my friend Binay Pattanayak (Senior Education Consultant at the World Bank). I was pleased to note that he confirmed that there are indeed things moving there!

There has been a push for tribal schools in Jharkhand to use the local languages since 2015. The development of textbooks in 5 tribal languages (Santhali, Mundari, Ho, Kuruh and Kharia) and 2 regional languages (Bangla and Odia) that were published back in 2016 was a step in that direction. In accordance with the NEP, Jharkhand education department now says that children are to be instructed in their mother tongue till the 3rd standard.

Schools having more than 70 per cent students that speak a particular tribal language, will provide lessons in that language. Children will be taught in their mother tongue till class 3, following which, they will start studying in Hindi and English languages. The focus is now being given to the following languages: Mundari, Kharia, Kurukh, Santhali, Ho, Nagpuri Panchpargania, Kurmali and Khortha.

Binay reports: “At present all these textbooks are being used in around 1000 schools in 10 districts. These books are not only culturally sensitive but also well appreciated. These are developed for classes 1 and 2. Class 3 textbooks are to be developed."

The New Indian express report states that the teaching in ‘Olchiki’ language has already begun in the schools of Santhal Pargana and separate text books have been published. “Teachers having better understanding of tribal or regional languages and those who can speak it properly would also be considered for teaching the children till formal appointment of tribal language teachers are done,” said State Programme Officer (Quality Education) at Jharkhand Education Project Council (JEPC), Abhinav Kumar. Binay informed that similar textbooks have also been developed in Warangchiti script of Ho language. These books since 2016 are being published by the state Government and are used in selected schools of West Singhbhum district of the state.

Binay also mentioned the following plans: “Now on behalf of M-TALL akhra we are preparing for a statewide 'linguistic survey' in partnership with all divisional universities in May 2022. It will be undertaken in 360 villages of 72 blocks in all 24 districts. Based on the findings the state aims to design strategies for a basic literacy and numeracy programme in the schools of the state.”

Another step at the National level that promoted Multilingual Education is the 'Mandate Document: Guidelines for the Development of the National Curriculum Framework (NCF)’ which was released by the Union Education Minister Dharmendra Pradhan. According to the India Today report the Union Education Minister emphasised a paradigm shift will be brought about by a focus on the holistic development of children, emphasis on skilling, the vital role of teachers, learning in the mother tongue, and cultural rootedness. The union minister also sees this as a step toward the decolonization of the Indian education system.

Good to note the progress. Thanks Binay for the additional information!