[MLE] Book from Prime Minister of Singapore on bilingualism 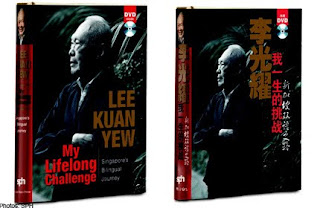 It is not often that top politicians write elaborately about issues related to multilingualism. Lee Kuan Yew the former prime minister of Singapore published recently "My lifelong challenge: Singapore's bilingual journey". He has been strong advocate of maintaining Chinese and other mother tongues within the schools in Singapore while still making English the mainstream language.


Some quotes from a Asia One newspaper review:


My Lifelong Challenge is the story of Mr Lee Kuan Yew's 50-year struggle to transform Singapore from a polyglot former British colony into a united nation where everyone, while knowing English, knows at least one other language, his own mother tongue. The founding prime minister of Singapore tells why he did away with vernacular schools in spite of violent political resistance, why he closed Nanyang University, why he later started Special Assistance Plan schools, and why he continues to urge all ethnic Chinese Singaporeans today to learn the Chinese language.


Mr Patrick Daniel, Editor-in-Chief of Singapore Press Holdings' English and Malay Newspapers Division, said: "This book recounts an important facet of Singapore's history. It contains insights, borne of experience, about the challenge of ensuring that each community preserves its own language and culture in a multiracial nation, while adopting English as the working language. It comes at an opportune moment too, as the world sees its centre of gravity shifting from West to East. I am glad that The Straits Times has had a part in bringing out this book."

In Singapore, former senior minister of state for community development Ch'ng Jit Koon said: "To this day, some people do not approve of the bilingual policy as a foundation stone of the nation. This book describes fully, accurately and clearly the background to these policies, helping us to understand why he did what he did. Whether the bilingual policy is right or wrong, history will be the judge. But if he had not done what he did, our country would not be what it is today."


Thanks to Prod Dr C.J.  Daswani for this valuable tip.


Posted by Karsten van Riezen at 7:59 AM