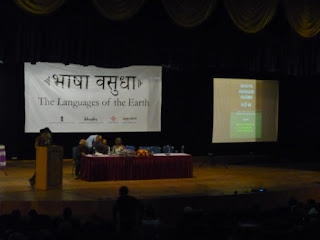 Earlier this months the People's Linguistic Survey of India  (PLSI) conference took place. 900 delegates from all over the world gathered in Baroda to celebrate the progress on survey.

A quote from the Lit-Ityadi report


Anyone familiar with George Grierson's historic work, the Linguistic Survey of India, compiled nearly 100 years ago, will immediately note the similarities. What is different however, about the PLSI, is the notion of networking, now made by possible by modern methods of communication, that enables adivasi people from Orissa to dance shoulder to shoulder with Bhili tribesmen from Gujarat. This sense of solidarity was felt, not only between the Indian delegates, but also internationally as we heard from indigenous people from Papua New Guinea and various parts of Africa.

A quote from the Times of India report


This is a survey of languages by persons belonging to the language community. We have used a 'minimum format' for the non-scheduled languages. It includes features like name, location and local history of the languages; some samples of songs and stories, kinship terms and nominal grammar. For the scheduled languages the entries are very elaborate - almost a book length for every language. The 12 volumes that are ready run into about 6,000 pages. The completed work in 42 volumes will have about 20,000 printed pages. The work is done with the help of a large team of nearly 1,800 persons and a large multi-disciplinary National Editorial Collective of scholars.

The Daily News Analyses report gave their article a positive heading: "Tribal Languages are not dying":


If you thought that the number of people speaking the languages used by tribes, nomads and de-notified tribes of India was falling with every generation, then you are in for a surprise. A survey of People's Linguistic Survey of India (PLSI) conducted by tribal activist and linguist, Dr Ganesh Devy, reveals that the number of languages considered weak had fallen. This indicates that the so-called 'weak languages' had actually a large number of speakers.

We are looking forward to see the volumes become available on the PLSI website so we can all have access to the data. Stay tuned!