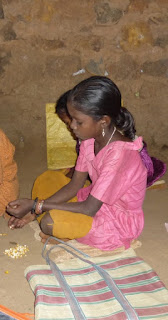 Constitution of India article 29 (1) and Article 350 (A) safeguard the linguistic right of the minority children in school. It is the duty of the state to provide education to the children of linguistic minority children in the school at least in the primary stage.
Article 21 A- Free and compulsory elementary education of equitable quality for all children up to 14 years of age.
Article 29 (1) : Any section of the citizens residing in the territory of India or any part thereof having a distinct language, script or culture of its own shall have the right to conserve the same.
Article 46- State to promote the Educational needs of the weaker sections of the society.
Article 350A: It shall be the endeavor of every State and of every local authority within the State to provide adequate facilities for instruction in the mother-tongue at the primary stage of education to children belonging to linguistic minority groups; and the President may issue such directions to any State as he considers necessary or proper for securing the provision of such facilitiesi

Starting in 1956, and with extensive revisions in the 1960s, India developed a three-language formula (TLF). It was first incorporated into the National Education Policy in 1968 by the Indira Gandhi government. Originally it meant, ‘In Hindi-speaking states: Hindi, English, and a modern Indian language (preferably one of the southern languages) and in non-Hindi-speaking states: English, Hindi, and the regional language.’ More details are given below

The National Curriculum Framework 2005 was made to guide the institutions and schools in encouraging the overall development of the children and the move away from textbook-centric learning. It emphasises the importance of imparting primary education in the mother tongue of the child. The 2022 National Curriculum Framework for foundational stages (NCF-FS) under the National Education Policy, 2020 recommends that the mother tongue should be the primary medium of instruction for children till eight years of age.

The National Education Policy 2020 was launched by the MHRD (Ministry of Human Resource Development) in 2020. NEP 2020 reflects the global education development agenda reflected in Goal 4 (SDG4) of the 2030 Agenda for Sustainable Development which seeks to “ensure inclusive and equitable quality education and promote lifelong learning opportunities for all” by 2030 (India is a signatory).
NEP focuses on the mother tongue/home language/local language and its importance in education Sec 4. Curriculum and Pedagogy in Schools. NEP says that wherever possible, the medium of instruction until at least Grade 5 will be the home language/mother tongue/local language/regional language.(Sec 4.11) The policy also focuses on teacher recruitment and knowledge of the local language as a plus for teacher recruitments. Section 15.1. States that the ‘Teachers must be grounded in Indian values, languages, knowledge, ethos, and traditions including tribal traditions, while also being well-versed in the latest advances in education and pedagogy.’ Part II 9.3. The policy’s vision includes the following key changes to the current system:a. (a) ‘moving towards a higher educational system consisting of large, multidisciplinary universities and colleges, with at least one in or near every district, and with more HEIs(Higher Education Institutions) across India that offer medium of instruction or programmes in local/Indian languages.’

Furthermore, both public and private sector institutions are asked to devise strategies to improve the quality and attractiveness of books published in all Indian languages under Sec 21 (Adult and Lifelong learning). Strengthening already existing libraries, setting up rural libraries and reading rooms in disadvantaged regions, and making widely available reading material in Indian languages are also spoken about in Sec 21:9. There are also efforts being made to preserve and promote all Indian languages including classical, tribal, and endangered languages under Sec 22:17 (Promotion of Indian Languages, Arts and Culture). All languages in India, and their associated arts and culture, are being planned to be documented through a web-based platform/portal/wiki, in order to preserve not only endangered but all Indian languages and their associated rich local arts and culture.(Sec 22:19) According to the NEP, the promotion of Indian languages can only be made possible if they are used regularly for teaching and learning. (Sec 22:20)

NEP section on Multilingualism and the Power of Language

4.12. As research clearly shows that children pick up languages extremely quickly between the ages of 2 and 8 and that multilingualism has great cognitive benefits to young students, children will be exposed to different languages early on (but with a particular emphasis on the mother tongue), starting from the Foundational Stage onwards. All languages will be taught in an enjoyable and interactive style, with plenty of interactive conversation, and with early reading and subsequently writing in the mother tongue in the early years, and with skills developed for reading and writing in other languages in Grade 3 and beyond. There will be a major effort from both the Central and State governments to invest in large numbers of language teachers in all regional languages around the country, and, in particular, for all languages mentioned in the Eighth Schedule of the Constitution of India. States, especially States from different regions of India, may enter into bilateral agreements to hire teachers in large numbers from each other, to satisfy the three-language formula in their respective States, and also to encourage the study of Indian languages across the country. Extensive use of technology will be made for teaching and learning of different languages and to popularize language learning.

4.13. The three-language formula will continue to be implemented while keeping in mind the Constitutional provisions, aspirations of the people, regions, and the Union, and the need to promote multilingualism as well as promote national unity. However, there will be a greater flexibility in the three-language formula, and no language will be imposed on any State. The three languages learned by children will be the choices of States, regions, and of course the students themselves, so long as at least two of the three languages are native to India. In particular, students who wish to change one or more of the three languages they are studying may do so in Grade 6 or 7, as long as they are able to demonstrate basic proficiency in three languages (including one language of India at the literature level) by the end of secondary school.

4.14. All efforts will be made in preparing high-quality bilingual textbooks and teaching-learning materials for science and mathematics, so that students are enabled to think and speak about the two subjects both in their home language/mother tongue and in English.

4.15. As so many developed countries around the world have amply demonstrated, being well educated in one’s language, culture, and traditions is not a detriment but indeed a huge benefit to educational, social, and technological advancement. India’s languages are among the richest, most scientific, most beautiful, and most expressive in the world, with a huge body of ancient as well as modern literature (both prose and poetry), film, and music written in these languages that help form India’s national identity and wealth. For purposes of cultural enrichment as well as national integration, all young Indians should be aware of the rich and vast array of languages of their country, and the treasures that they and their literature contain.

4.16. Thus, every student in the country will participate in a fun project/activity on ‘The Languages of India’, sometime in Grades 6-8, such as, under the ‘Ek Bharat Shrestha Bharat’ initiative. In this project/activity, students will learn about the remarkable unity of most of the major Indian languages, starting with their common phonetic and scientifically-arranged alphabets and scripts, their common grammatical structures, their origins and sources of vocabularies from Sanskrit and other classical languages, as well as their rich inter-influences and differences. They will also learn what geographical areas speak which languages, get a sense of the nature and structure of tribal languages, and learn to say commonly spoken phrases and sentences in every major language of India and also learn a bit about the rich and uplifting literature of each (through suitable translations as necessary). Such an activity would give them both a sense of the unity and the beautiful cultural heritage and diversity of India and would be a wonderful icebreaker their whole lives as they meet people from other parts of India. This project/activity would be a joyful activity and would not involve any form of assessment.

4.17. The importance, relevance, and beauty of the classical languages and literature of India also cannot be overlooked. Sanskrit, while also an important modern language mentioned in the Eighth Schedule of the Constitution of India, possesses a classical literature that is greater in volume than that of Latin and Greek put together, containing vast treasures of mathematics, philosophy, grammar, music, politics, medicine, architecture, metallurgy, drama, poetry, storytelling, and more (known as ‘Sanskrit Knowledge Systems’), written by people of various religions as well as non-religious people, and by people from all walks of life and a wide range of socio-economic backgrounds over thousands of years. Sanskrit will thus be offered at all levels of school and higher education as an important, enriching option for students, including as an option in the three-language formula. It will be taught in ways that are interesting and experiential as well as contemporarily relevant, including through the use of Sanskrit Knowledge Systems, and in particular through phonetics and pronunciation. Sanskrit textbooks at the foundational and middle school level may be written in Simple Standard Sanskrit (SSS) to teach Sanskrit through Sanskrit (STS) and make its study truly enjoyable.

4.18. India also has an extremely rich literature in other classical languages, including classical Tamil, Telugu, Kannada, Malayalam, Odia. In addition to these classical languages Pali, Persian, and Prakrit; and their works of literature too must be preserved for their richness and for the pleasure and enrichment of posterity. As India becomes a fully developed country, the next generation will want to partake in and be enriched by India’s extensive and beautiful classical literature. In addition to Sanskrit, other classical languages and literatures of India, including Tamil, Telugu, Kannada, Malayalam, Odia, Pali, Persian, and Prakrit, will also be widely available in schools as options for students, possibly as online modules, through experiential and innovative approaches, to ensure that these languages and literature stay alive and vibrant. Similar efforts will be made for all Indian languages having rich oral and written literatures, cultural traditions, and knowledge.

4.19. For the enrichment of the children, and for the preservation of these rich languages and their artistic treasures, all students in all schools, public or private, will have the option of learning at least two years of a classical language of India and its associated literature, through experiential and innovative approaches, including the integration of technology, in Grades 6-12, with the option to continue from the middle stage through the secondary stage and beyond.

4.20. In addition to high quality offerings in Indian languages and English, foreign languages, such as Korean, Japanese, Thai, French, German, Spanish, Portuguese, and Russian, will also be offered at the secondary level, for students to learn about the cultures of the world and to enrich their global knowledge and mobility according to their own interests and aspirations.

4.21. The teaching of all languages will be enhanced through innovative and experiential methods, including through gamification and apps, by weaving in the cultural aspects of the languages - such as films, theatre, storytelling, poetry, and music - and by drawing connections with various relevant subjects and with real-life experiences. Thus, the teaching of languages will also be based on experiential-learning pedagogy.

4.22. Indian Sign Language (ISL) will be standardized across the country, and National and State curriculum materials developed, for use by students with hearing impairment. Local sign languages will be respected and taught as well, where possible and relevant.